The Next Breakthrough Could Be Yours 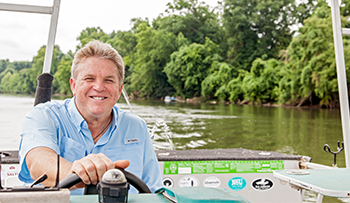 When Al Harman was diagnosed with renal cell carcinoma in 2006, he had surgery in his hometown, but when the cancer returned two years later, he and wife Lisa decided to look around for options. When his doctor suggested a clinical trial, Al said he wanted to try it because he knew it would give him the best chance. A long-time professional sport fisherman, Al still tries to fish every day and makes it off-shore to fish a couple of times a year.

We didn’t like the options they were giving us, so we went looking for someone who specializes in kidney cancer and a place that could offer us better options – our research led us to Hollings Cancer Center.

In late 2012, Jesse Hardy found himself in need of emergency surgery for a painful blood clot in his abdomen. During the procedure, the surgeon discovered multiple tumors on Jesse’s liver. More than a year later, Jesse – a husband, father and grandfather - is participating in a national clinical trial led by Hollings. He has responded so well to treatment that he recently came out of retirement to work as a mechanic in a new garage. “The treatment I’ve received through this center – it’s indescribable. It is totally amazing the things that are being done here. With what Hollings is offering patients right now, and what they are doing in research for the future, well, I’m just glad I am a part of it.”

When Katie Maxwell visited her physician with unexplained body pain and abdominal bloating, she suspected the symptoms were related to a recent fall from a horse during competition. However, tests revealed the 42-year-old wife and mother had advanced peritoneal cancer, a “cousin” of ovarian cancer. The diagnosis led the former nurse, wife and mother to the Hollings Cancer Center where she was offered a clinical trial. “Over the course of treatment, Hollings became a sanctuary for me and my husband. Knowing everything I do now, I would not be treated anywhere other than a research hospital. I want to be at a place where they are looking for answers.”

Robert Williams was working at MUSC when diagnosed with bladder cancer in 2011. After noticing blood in his urine, he was referred to Dr. Savage, a urologist at Hollings, who diagnosed the cancer. After his diagnosis, Robert was introduced to Dr. Carolyn Britten who oversees clinical trials at Hollings. “She told me about the clinical trial and said there would be no guarantee, but asked if I’d like to try it. I said yes. I had nothing to lose,” Robert shares. Today, Robert feels that the clinical trial has helped him get back to the things he enjoys. “At one time, I couldn’t walk around the block without getting tired,” he says, but now, Robert reports he has regained his energy and is able to spending his time with his grandchildren, who he is glad to chase around the block.

I remember being concerned that I was going to have to travel to receive the best care possible, but after looking around and learning about Hollings Cancer Center and the opportunity for clinical trials here, I was so relieved that the best care was right here. I had the dream team here at Hollings.

When Ann Ramsdell, a mother of two and a biologist at MUSC, was diagnosed with Stage III breast cancer, she could have chosen to be treated anywhere. But Ann chose the Hollings Cancer Center because of its clinical trials program. Today, Ann is in remission and has switched the focus of her research from heart defects to breast cancer.

When a spot, or “nodule” was found on one of my lungs, Dr. Chadrick Denlinger recommended a minimally-invasive procedure called VATs, or video-assisted thoracoscopic surgery. I did some research and found that the surgery was fairly simple and would leave me with just three small scars on my left side. Dr. Denlinger explained everything to me – from the details of the procedure to what I could expect from my recovery – very well. Following the surgery, I had a brief recovery period then got started on my rehab with a personal trainer. Thanks to this procedure and the wonderful staff at MUSC, I’m cancer free and back to my active life in Hilton Head.

Pamala Reese is a busy machine operator, mother and grandmother. After letting too many years go between mammograms, she received one at the Hollings mobile health unit and learned she had breast cancer, frightening news for anyone. Fortunately, Reese was successfully treated and is back to work and enjoying her family. Now on long-term medication to help prevent recurrence of cancer, she says,

“I feel truly blessed to be here. If I had not gotten that mammogram when I did, I don’t know what would have happened. Now I urge other women to get their mammograms.”

Diagnosed with head and neck cancer, Ed Bostain hoped his treatment would allow him to continue doing what he loved most: firefighting and rescue diving. Ed's doctors at the Hollings Cancer Center determined he was a candidate for a clinical trial. Today, Ed is back on the job and back in the water.

"I went on a clinical trial and pretty soon my tumor – not my career – was history."